Check out some of our favorite Hollywood couples who found romance together on screen and in real life.

2021 Golden Globe Nominees In and Out of Character

Check out our gallery of the 2021 Golden Globe nominees in the leading and supporting acting categories, as the characters they so brilliantly played and in real life

Drama, Romcom
a list of 35 titles
created 3 months ago

Search for "Always Be My Maybe" on Amazon.com

'Always Be My Maybe' Stars Are Rom-Coms Experts 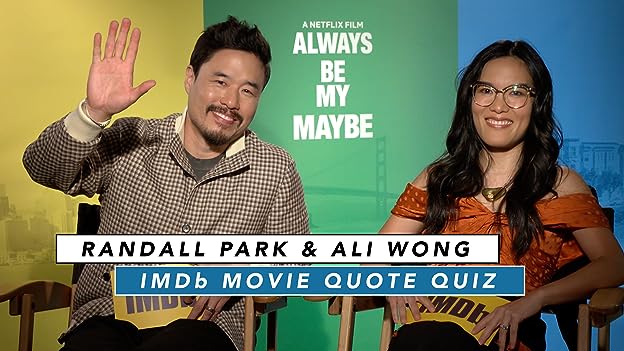 The stars of the new Netflix movie Always Be My Maybe show off their rom-com knowledge when they play a round of the IMDb Romantic Movie Quote Quiz.

Childhood friends Sasha and Marcus have a falling out and don't speak for 15 years. But when Sasha, now a celebrity chef in Los Angeles, returns to her hometown of San Francisco to open a new restaurant, she runs into her old pal - a happily complacent musician still living at home and working for his dad. Though the two are reluctant to reconnect, they soon find the old sparks - and maybe some new ones - are there. Written by Netflix

There's Always Been Something Between Them

Keanu Reeves improvised some of his scenes. It was his idea to list all of the Chinese dignitaries in the game night scene. Reeves also improvised the lines "I missed your light"/"I missed your soul", and "I don't have a problem, Sasha. What's your problem?" along with the karate gestures. See more »

Several instances of dialogue being dubbed in post-production during moments when characters are clearly not speaking, such as Sasha's lines about a tampon budget and Ellen's 80's comedy. See more »

Sasha Tran: Dude, you so did that on purpose.
Veronica: I thought it was just gonna be Mr. Kim. I had no idea Marcus was gonna be working with him.
Sasha Tran: The company is literally called, "Harry and Son."
See more »

Refreshing, hilarious and absolutely magical
1 June 2019 | by anvi-sharma – See all my reviews

I think this might be my favourite rom-com ever. It had everything - I laughed and I cried multiple times throughout the movie. Special shoutout to Karan Soni and Michelle Buteau, who both had impeccable comedic timing and stole the show pretty much everytime they were on screen.

And of course, Randall Park and Ali Wong ... they KILLED it. This was gold. I had high expectations, and this met all of them and went beyond.

It was a little predictable and some of the jumps between scenes were a little quick, but these are just minor critiques.

Also, Keanu Reeves. That's all I'm gonna say about that.

Always Be My Maybe See more »