Becca shows up on Butcher's doorstep and begs for his help. The Boys agree to back Butcher, and together with Starlight, they finally face off against Homelander and Stormfront. But things go very ...

To help Victoria Neuman make a case against Vought, Mallory and The Boys look to an unlikely source for answers. Hughie gets terrifying news about Starlight. Meanwhile, Homelander and Stormfront ...

Over the Hill with the Swords of a Thousand Men

The Boys take to the high seas to safeguard their prisoner. Homelander plays house, then pushes Ryan over the edge. Starlight is forced to make an impossible choice. Stormfront reveals her true ...

Looking for a movie the entire family can enjoy? Check out our picks for family friendly movies movies that transcend all ages. For even more, visit our Family Entertainment Guide.

TV Tracker: Renewed and Canceled Shows
a list of 97 images
updated 3 days ago

Editors' Picks: Streaming TV and Movies on Prime Video
a list of 30 images
updated 1 week ago

2020 TV Guide: The Best Shows Coming This Year
a list of 37 images
updated 2 weeks ago

Search for "The Boys" on Amazon.com

"The Boys" — Even More Morally Ambiguous in Season 2 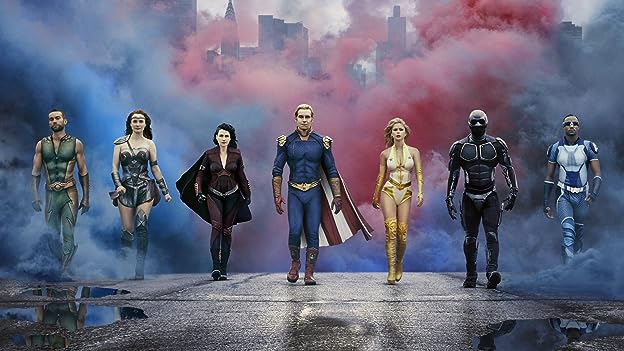 Erin Moriarty, Jack Quaid, Karl Urban, Antony Starr, Aya Cash, and Giancarlo Esposito of "The Boys" sound off on their characters' moral ambiguity and good and evil in Season 2.

The Boys is set in a universe in which superpowered people are recognized as heroes by the general public and owned by a powerful corporation, Vought International, which ensures that they are aggressively marketed and monetized. Outside of their heroic personas, most are arrogant and corrupt. The series primarily focuses on two groups: the titular Boys, vigilantes looking to keep the corrupted heroes under control, and the Seven, Vought International's premier superhero team. The Boys are led by Billy Butcher, who despises all superpowered people, and the Seven are led by the egotistical and unstable Homelander. As a conflict ensues between the two groups, the series also follows the new members of each team: Hugh "Hughie" Campbell of the Boys, who joins the vigilantes after his girlfriend is killed in a high-speed collision by the Seven's A-Train, and Annie January/Starlight of the Seven, a young and hopeful heroine forced to face the truth about the heroes she admires.

Every t-shirt that Mother's Milk wears has a saying, slogan, or music group in plain letters on the front. It is the same for the graphic novel character version. See more »

Annie January: Since when did hopeful and naive become the same thing?
See more »

Who R U?
Performed by Anderson .Paak
See more »

Excellent dystopian reimagining for Superhero nerds. Surprising, violent, always twisting. Binge-watched in 2 days! So glad for a second season, though will be so impatient! Thumbs up.

Q: What's with that fly in a couple of scenes flying in front of people faces?it's clearly some kind of Easter egg or reference, can someone answer this?
Q: Will this be available on DVD in the future from amazon?
Q: Why do animal shows seem to be playing on the tv's in various episodes?
See more »
Edit