Claire is stuck at an airport and trying to digitally track down Haley after an argument.

On a trip to Las Vegas, Jay wheels and deals to get a better room, Claire tries to win back the money she lost last year, Phil tries to get into a magician's club, and Cameron chooses a bachelor ...

Caught in the Act

Phil and Claire's kids walk in on them having sex while delivering their anniversary present, Gloria tries to keep Claire from seeing an angry e-mail, and Mitchell and Cameron contemplate how to ...

Everything New on Disney Plus in June

Disneyis + bringing some exciting new movies and series to their catalog of classics! Check out what's streaming this month.

Shows Watched
a list of 40 titles
created 2 weeks ago

How many episodes of Modern Family have you seen?

Search for "Modern Family" on Amazon.com

Who Was Almost Cast in "Modern Family"? 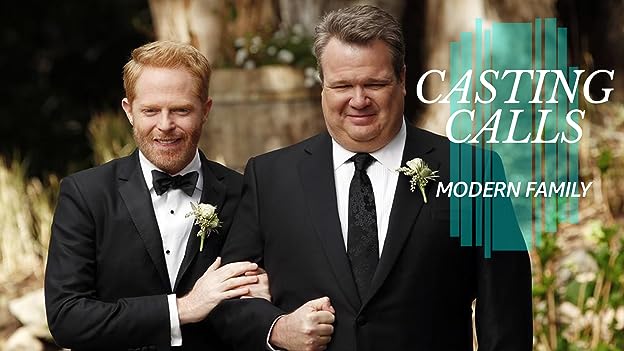 After 11 years on the air, it's hard to imagine anyone else in this "Modern Family." But it almost looked very different. What other actors were considered for leading roles on the show?

Follows the personal and professional lives of six twenty to thirty-something-year-old friends living in Manhattan.

A drama centered on the personal and professional lives of five surgical interns and their supervisors.

"Brooklyn Nine-Nine" follows the exploits of hilarious Det. Jake Peralta and his diverse, lovable colleagues as they police the NYPD's 99th Precinct.

A mockumentary on a group of typical office workers, where the workday consists of ego clashes, inappropriate behavior, and tedium.

The cases of the F.B.I. Behavioral Analysis Unit (B.A.U.), an elite group of profilers who analyze the nation's most dangerous serial killers and individual heinous crimes in an effort to anticipate their next moves before they strike again.

A father recounts to his children - through a series of flashbacks - the journey he and his four best friends took leading up to him meeting their mother.

A suspended lawyer is forced to enroll in a community college with an eccentric staff and student body.

A bipolar CIA operative becomes convinced a prisoner of war has been turned by al-Qaeda and is planning to carry out a terrorist attack on American soil.

A woman who moves into an apartment across the hall from two brilliant but socially awkward physicists shows them how little they know about life outside of the laboratory.

A new FBI profiler, Elizabeth Keen, has her entire life uprooted when a mysterious criminal, Raymond Reddington, who has eluded capture for decades, turns himself in and insists on speaking only to her.

Nine noble families fight for control over the lands of Westeros, while an ancient enemy returns after being dormant for millennia.

Told from the perspective of an unseen documentary filmmaker, the series offers an honest, often-hilarious perspective of family life. Parents Phil and Claire yearn for an honest, open relationship with their three kids, but a daughter who is trying to grow up too fast, another who is too smart for her own good, and a rambunctious young son make it challenging. Claire's dad Jay and his Latina wife Gloria are raising two sons together, but people sometimes believe Jay to be Gloria's father. Jay's gay son Mitchell and his partner Cameron have adopted a little Asian girl, completing one big -- straight, gay, multicultural, traditional -- happy family. Written by Jwelch5742

Nolan Gould was only 12, when they filmed the episode "Caught In The Act", which features the Dunphy children walking in on their parents having sex. He had some difficulty understanding all the innuendoes and double entendres. It wasn't until he watched the episode a few years later that he fully understood all the jokes. See more »

Mitchell and Cameron adopted a child from Vietnam. This is legally impossible as Vietnam's laws forbid a child to be adopted by single parents or same sex couples. They could still adopt the child illegally but then it would be impossible to bring it back to the States. See more »

At the beginning of each episode, the actors' names appear on screen in order of their character's ages. (Oldest to youngest) See more »

For those still in withdrawal from the cancellation of Arrested Development, let me write you a prescription: Modern Family. The comparisons are obvious and with good reason. The postmodern comedy for the 21 century was ushered in by The Office(UK) and Arrested Development, but I, for one, doubted something could come along and satiate my longing for another truly, original comedy. Albeit, you may initially be wary to see yet another mockumentary-style show, but by the end of the pilot, you'll be smiling/laughing way too hard to stay cynical. Thus far, the plot lines have been really fresh and the characters are so, for lack of a better word, lovable. This show fulfills all my comedy needs, and I feel like I must resort to the listing of relevant adjectives: Witty, dry, smart, outlandish, silly, clever, cute, sarcastic, subtle, not-so subtle. HILARIOUS. I hate to say it, but the laugh tracks and raw goofyness of classic sitcoms like 'Seinfeld' and 'Friends' are obsolete and leave something to be desired. You will find that something in Modern Family. And who knows, maybe some of the more painfully funny and poignant scenarios will reveal insight into the changing dynamics of both the modern family and modern comedy. Great show. Period. And let's get it right this time around: don't cancel good TV shows. Pretty please?

Q: How well does this series represent the LGBT community?
Q: Is this supposed to be a documentary?
Q: Is Jay widowed or divorced?
See more »
Edit